Back in 2006 I’ve started the step-by-step replacement of Windows PCs at home and in my shack. Replacing Windows at home was not a big deal. What my XYL and I needed: a browser, an email client, some kind of office suite, players for various audio and video formats and some other minor tools. Ubuntu 6.06 LTS (Dapper Drake) was the Linux distribution of choice and except for some issues related to graphics adapters, all went well.

My laptop was the first pure Linux machine at home, followed by the wifey’s laptop. Side note: Ever since then, I haven’t had to take care of problems on my wifey’s laptop, except ugrading the Ubuntu LTS version. The shack PC was the third and last machine to get a Linux OS. I’ve installed the Ubuntu 6.06 LTS next to Windows XP and made a dual boot system out of it. So I was easily able to boot either Windows XP or Ubuntu.

My main interest in amateur radio has always been contesting. I’ve never been deep into digimodes or other stuff, so my first look was for Linux contesting software. That was when the frustration began. Except for the console based YFKtest of Fabian DJ1YFK and TLF of Rein PA0R, no serious Linux contest logger has been available. Both are great programs by great contesters, but if you’re used to the Win-Test Contest Logger, neither of them fit your needs. So I got stuck on Windows, first XP, then Windows 7 and Win-Test. Over the years I tried to run Win-Test within Wine and Xubuntu over and over again. There have been always issues, which made it impossible to use this combination in contests, like

In 2013 Petr OK2CQR, the author of the famous CQRLOG linux logging program, announced “CQRTest”, a contest logger for Linux! Unfortunately Petr has dropped it in favour of the CQRLOG and HamQTH development. So I still got stuck on Windows 7 and Win-Test. After quite some time without being active in contests at all, I gave Win-Test and Wine a try again in the ARRL DX CW 2015 contest. I’ve done some S&P on Saturday and CQed on Sunday. Except minor issues, everything went very well. Even LUA scripts worked perfectly right out of the box. The following software has been used:

Make sure the Windows version set in the Wine configuration is set to Windows 7. For the usage of CAT, CW and PTT interfaces, symlinks from the Linux device ports to the Windows typical COM ports had to be created first. For Wine prior to version 2.8 open a terminal any type:

If you use Wine 2.8 or later, you have to override the auto device mapping of Wine instead of creating smylinks, because you may get COM ports with high numbers (like com33) for your USB to RS232 converters or your transceivers connected via USB. At least Win-Test does not support such high COM numbers. Follow these instructions to map your USB device to e.g. COM1 or COM2.

Important: To get access to the /dev/ttyUSBx devices in general, the current user has to be member of the group dialout:

A logout/login or reboot is necessary for changes to take effect. Having PTT via COM port is also useful for the digital voice keyer within Win-Test, which also works pretty decent on my TS-590SG.

Some Win-Test windows have a ‘Serif’ font, which makes the content difficult to read. This should be changed into a ‘Sans Serif’ font (right click into the window, click on ‘Serif’, checkmark disappears, ‘Sans Serif’ is activated).

The screenshot below shows the running Win-Test, together with Ham Cap Prediction Map and the Win-Test Telnet DX Cluster application. 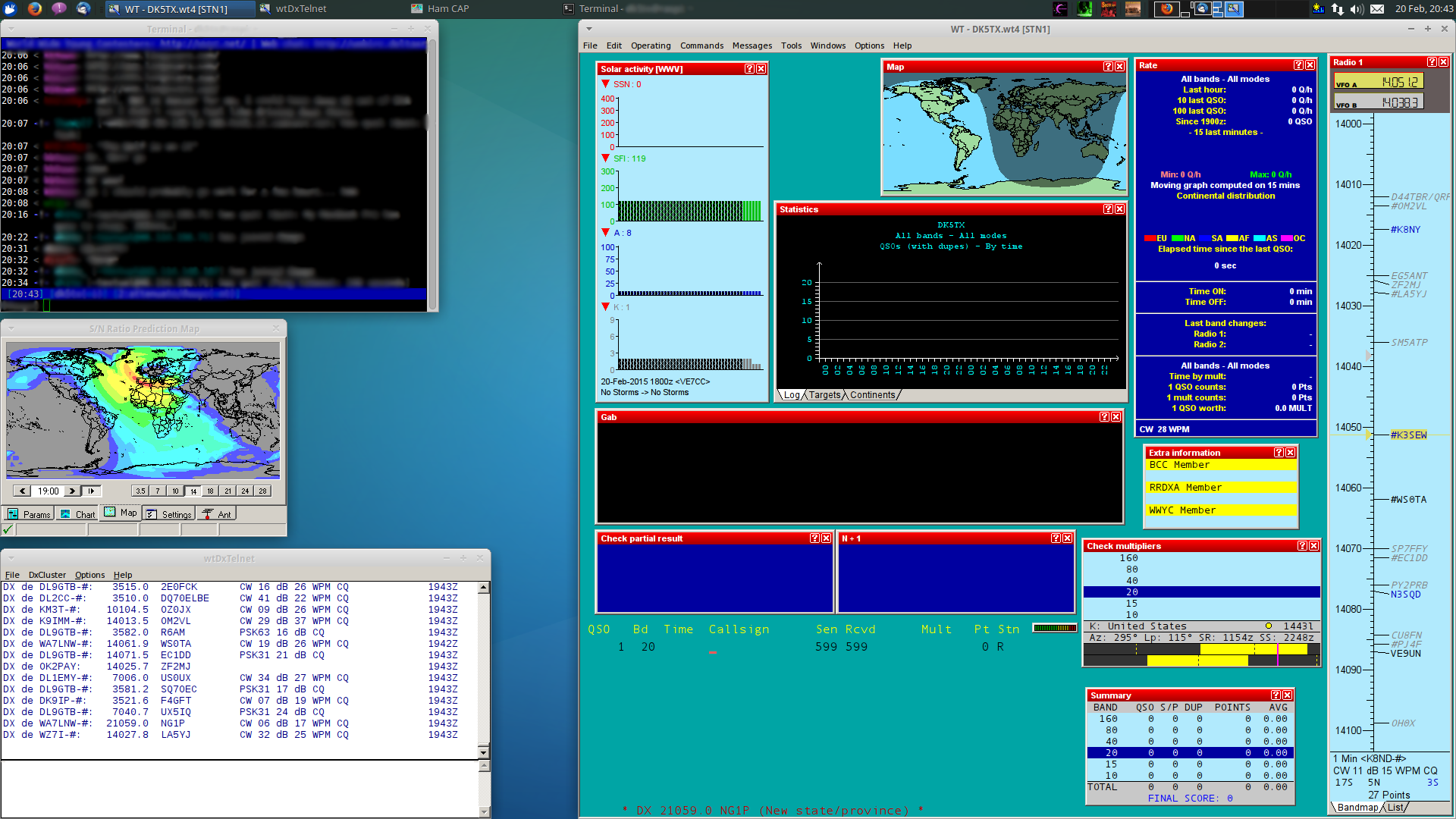